I went to Cardiff Wales from the 26th May to the 28th May 2015. It was my first time visiting Wales and I figured Cardiff the capital city of Wales was a good place to start.

I found a very cheap hostel, The Riverhouse Backpackers at which I stayed 2 nights and paid £46 for a 4 bed female dorm. It was very clean, the facilities were good and the location was brilliant, only 10 mins from Cardiff Castle, 5 mins from the Train and Bus Station and across the road for the famous Cardiff Millenium Stadium.

Cardiff is a relatively small city with just over 300,000 in population. Regardless of its size Cardiff has a lot to offer.

What I did on my trip

The bay has a lot going on, with lots of pubs,bars, restaurants, Dr Who Experience and water sports to keep on occupied.

Although I didn’t do this but you could also walk to Penarth marina along the barrage. I trust this would offer some fantastic views.

I really liked the Bay Area although it was very busy and touristy.

I also went on a boat ride around the bay, a 20 minutes boat ride cost £3, cheap as chips. 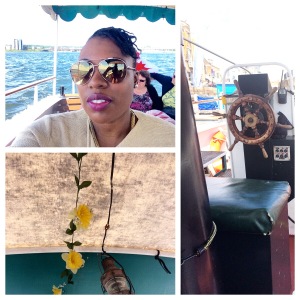 It was a lovely if a little chilly boat ride but the daffodil boat had blankets on board which I found very nice.

Cardiff Castle (Welsh: Castell Caerdydd) is a medieval castle and Victorian Gothic revival mansion located in the city centre of Cardiff, Wales. The original motte and Bailey castle was built-in the late 11th century by Norman invaders on top of a 3rd-century Roman fort.

The Castle is truly amazing. It is so well kept and a fitting and dominating landmark in Cardiff.

The play was hilarious I truly enjoyed myself and it felt extra special watching the play in such a historical and beautiful place such as Cardiff Castle.

I went to the Cardiff history museum as it was free and although the museum exhibits are geared mainly towards children, I found it interesting and worth the visit.

One of the exhibitions I really liked as it depicted the Welsh fighting spirit very well.

This was an interesting museum with lots of things to see, I found the exhibition based on the formation of the earth to present day to be most fascinating. Children will also love the life-size recreation of prehistoric animals, with some being automated like the wholly mammal.

I just walked round and took pictures of any amazing architecture I came across. Taking pictures of buildings and things I find is one of my favourite things to do on a holiday/trip/getaway.

My Ratings of Cardiff

My ratings are out of ten and are my own personal views therefore feel free to disagree .

I went to the Cardiff History museum and The National Museum Cardiff they were both very interesting, free and in the city centre.

I would normally visit the Museum of Modern Art in any city I go to, but I didn’t have enough time. I did however find a gallery that had some cool pieces.

The people were just British, that’s the only way I can describe them.

Cardiff has a very dynamic party scene, however I found it odd that many of the pubs charged an entry fee, that I found to be rather off-putting.

It’s a quaint city, being a Londoner I felt like I was in a big London town and not a capital city. It is still a cool city.

I cannot give a rating as I did not seek out any Welsh food to eat, I ate Pizza two of the nights I was there. However there appeared to be many restaurants to cater to all types of tastes and cuisine preference.

Cardiff was very affordable, it is certainly cheaper than London. I didn’t need to use public transport as i walked everywhere. I didn’t pay any entrance fees for the museum I visited.  Prices for food and drink are also rather reasonable, a three course meal could be  for £25 at most standard restaurants.

Quaint comes up a lot when I think of Cardiff. The vibe was chilled which is what I wanted. However any longer than two days I would have been too chilled and started to feel bored.

All in all Cardiff was a great break for me it was 3.5hrs away via coach, the return prices was only £17. For those coming from farther afield I suggest Cardiff forms part of a tour of the UK rather than the main destination.

And there you have it, it was a very short trip and I believe two days was enough to see this small but beautiful city.

Would I come back? Yes, however for a specific purpose, such as another play or event in the Castle. If i do come back I would go to other places nearby such as going for a walk on Brecon Beacons which isn’t too far away.